He suggested that maybe it was part of God’s plan “to teach me
greater patience and humility.” On the bright side, the Pope noted, the
incident he gave him “more time for prayer and meditation.” 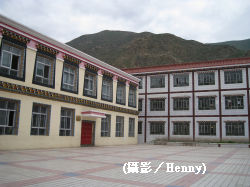 Encouraging them to bear witness to Jesus Christ, the Pope urged
them both to help bring
discussion of God back into
the classroom and to overcome
materialist worldviews.

Benedict XVI is underlining charity as the source, standard and strategy
of all the organizations that serve the Church.

As Benedict XVI urges developed nations to stop cutting aid to less
developed ones, a study notes that private giving is actually on the
rise, especially in the United States.

The Pope added that today when Italy and many other nations celebrate the Bread of life, I wish to make special mention of the hundreds of
millions of people who suffer hunger.

The Pope greeted the leaders and said I am confident that the summit
will do much to draw the attention of world political leaders to the
importance of religions within the social fabric of every society
and to the grave duty to ensure that their deliberations and policies
support and uphold the common good. 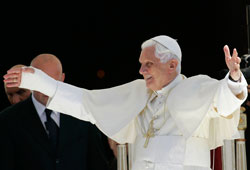 The spokesman said the
examination lasted for about a
half hour and had great result,
the clinical exam showed that
progress is good and corresponds
to what was expected.

Recently Pope Benedict XVI met with more than 7,000 children of the
Pontifical Work of Missionary Childhood. In the course of the meeting he
replied to questions put to him by three of the infants. 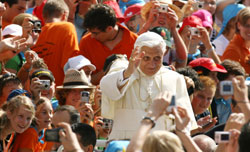 Benedict XVI is assuring youth,
especially the unemployed, that
the Church will not abandon
them. He is asking them in turn
not to abandon the Church. 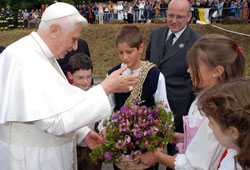 A little girl name Letizia asked
Pope, “Dear Pope Benedict XVI,
did you ever think of becoming
the Pope?”"To tell you the
truth,” Pope Benedict responded,
"I never thought of becoming the
Pope, because as I have already explained, I used to be a fairly naive young boy in a small country town
very far from centers in a forgotten province.”